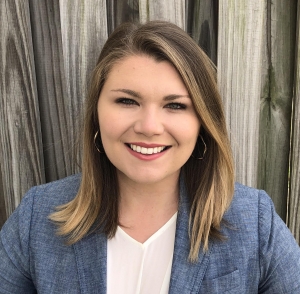 Taylor Johnson is a Florida native who recently relocated to Northern Virginia with her husband, Matt, who is a Second Lieutenant in the United States Marine Corps. She holds a Bachelor of Science in Family, Youth, and Community Sciences and a Master of Science in Leadership Development both earned from the University of Florida. Prior to joining the EPIC team, she was a Development Officer for the University of Florida Foundation for three and a half years during which she raised $1.7 million toward essential programs, student scholarships, and capital projects. In her leisure, she enjoys exercising, being outdoors, listening to podcasts, and drinking iced coffee.

As a graduate student, she collaborated with professors to create an evaluation instrument for youth organizations to measure their effectiveness in developing leadership skills regardless of their priority curriculum. This tool is being implemented throughout several 4-H programs in the state of Florida. To bolster the “textbook knowledge” she gained while earning her degrees, she has worked and volunteered for several different nonprofit organizations in a variety of capacities from collaborating with the administration team to committing her time as a volunteer. She has a passion for organizations that empower all people and pursue positive community change to flourish.

Ready to Take it to the Next Step?

Click the button below to drop us a line.