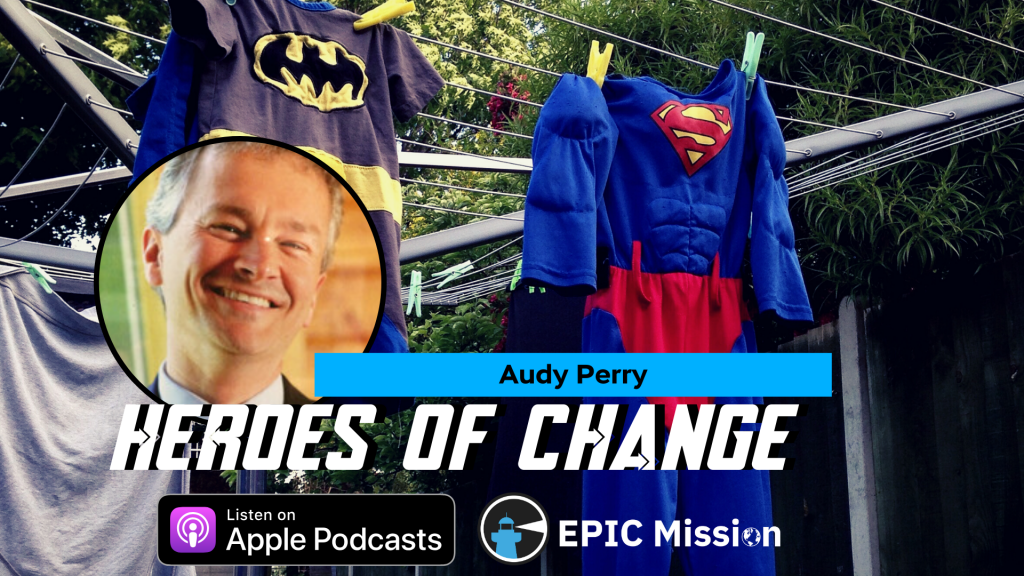 Faith is the belief in something much larger than yourself that you cannot see or touch or hear, but in which you, nevertheless, place your trust and to which you surrender your control. Audy Perry has faith in abundance and it oozes from him every pore in the most wonderful way imaginable. His positivity is infectious and his concern for the wellbeing of the common man, woman and child is palpable.

I once heard a speaker say that no one will follow a negative, gloomy naysayer who constantly points out all the reasons something will fail. It’s no wonder Audy commands such respect and admiration from those who know him and it’s no surprise that others will come alongside him so readily when he shares his vision for the next project he must endeavor to take on. Like all great Heroes of Change, he inspires others by including them in the process, encouraging them to bring their authentic selves and God-given abilities to the table and inviting them to join him on a mission that is for the greater good.

Audy has proven that he is a man of faith many times by letting his actions speak for him. He walked away from a lucrative career in law to step into a leadership role with The Farm in order to foster the legacy of his parents. He believed that his steps were being guided and that all would be well even if he couldn’t see exactly how. You don’t have to be a Christian to practice faith. If you believe in something larger than you are find yourself willing to trust the universe or karma or something else beyond yourself by moving beyond words to taking action in support of your beliefs, then you too are a person of faith. The Heroes of Change recognize that talk is cheap and that words only have limited ability to move the feet of others when a leader’s actions are not congruent with what has been spoken.

Great leaders also have a seemingly innate ability to take stock of the talents and resources readily available to them, and they help those around them to become the best version of themselves by staying in their proverbial lanes. Here in Appalachia, we have too often looked outside of the region at the glitzier areas of our country and world as we searched for something more glamorous. We have too often forgotten what makes our people special, and we have paid the price for that failure. You see, we have always been scrappy, resourceful and resilient problem solvers who were willing to take on the greatest challenges and the most unforgiving landscapes risking everything to carve our own paths. We have always been makers who followed in the footsteps of our forefathers who were also scrappy, resourceful and resilient problem solvers. Yet, somewhere along the way, we have largely lost or forgotten or refused our heritage because we could no longer see our own talent and available resources and could no longer envision what might be the best version of ourselves. Luckily, we have Heroes like Audy, and his parents before him, who help us to see the path forward by remembering who we are, where we came from and what superpowers we possess. Heroes help us to remember that there is nothing wrong with us, we just aren’t everybody else and that is where our magic lies.